A Brief History of Lindos and What to Look Out For 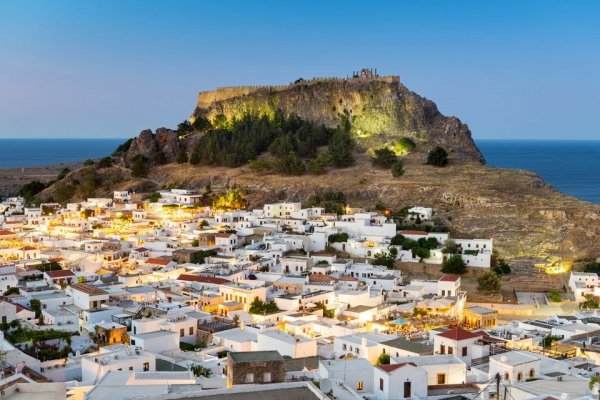 Situated on the Greek island of Rhodes, Lindos is a town full of ancient history and legends, a lot of which is still evident today. Famous for being the second most visited archaeological site in Greece, coming second only to Delphi, there are many artefacts, buildings and monuments packed into this small town.

According to Greek mythology, Danaus, son of the King of Egypt, founded Lindos when he was fleeing Hera and his brother who had 50 sons to whom it was planned would marry Danaus’ 50 daughters. To escape the family complications, Danaus resided with his daughters in Lindos before moving onto mainland Greece.

Legend says, Danaus also built the Doric temple of Athena on the acropolis and put a status of Athena there to worship. The remains of this from 300BC still stand.

Visually, it is nearly impossible to miss this glorious, medieval acropolis watching carefully over the town, but what other Greek secrets has it seen?

If you visit the acropolis and pay close attention you will be able to see some really historic and meaningful monuments. For example, upon entering the acropolis, see if you can spot the underground water tanks which are still visible.

The rest of the acropolis in Lindos is great to see and a brilliant day out. If you chose to visit this ancient settlement, you will have the chance to view a variety of buildings throughout Rhodes’ history. Sadly, most of the original Byzantine fort which originally stood here, no longer exists. However, you can see the more ‘modern’ buildings – these were built during the 1300s. The Castle of the Knights of St John is one of the most famous tourist hot spots here built in 1317. The knights that lived here helped to improve the acropolis, giving Lindos the advantage it needed to succeed.

If you go by the Doric temple of Athena, you will need to climb a medieval staircase. Before getting to the temple you will also see gateways and other buildings from the 4th Century BC.

The ancient Rhodians were a civilisation renowned for the battles and wars they endured. Visiting Lindos will paint a vivid picture of this race and what they fought for. At the acropolis itself, you can see a Greek warship dating back to 280 BC which was carved into the rock to depict the island’s strong naval association. The very first naval code is of Rhodian descent and written by Emperor Antonio in Rhodes, ‘We may rule the world but the Rhodian Code rules the seas.’

Day to day life in the village

Only 50,000 live outside of the city of Rhodes in the surrounding 42 villages, meaning that the population of Lindos live a quiet, mostly undisturbed life in the hillside beneath the acropolis. The village is a whitewashed haven, full of traditional winding roads and courtyards, with mosaics and pebbles adorning the white and blue backdrops. This town is wonderfully preserved inside and out, look for ceilings, doorways, gateways and walls that paints pictures of the town’s history and traditions.

If you find time to stroll around the village, make sure you take a look around the Virgin Mary of Lindos church, also known as the church of Panagia (Our Lady) which is situated in the heart of the village. You can’t miss it, due to its high-rise, stone tower, red tiles and domed roof – something popular in Dodecanese churches. This church is down as one of the main sites to see in Lindos, thanks to the stunning frescoes inside, some are the work of Gregorios of Symi from the 1700s. Take in everything the high walls and beautifully decorated interiors have to offer as well as study the frescoes and mosaics. From images of biblical scenes, saints, Jesus and the Virgin Mary to warnings of death and destruction in Hell if you chose not to listen to the message of the church, the frescoes are colourful and vibrant. You can also see bronze chandeliers and thrones.

It is said this church was ordered by the Grand Master of the Knights of Rhodes.

Not to do with the Greek scholar Kleovoulos, this ancient burial site is an interesting day out and the tombs of another rich Lindian family. The tombs are at the end of a great walk with great views over Lindos the whole way, and even a windmill to see en-route. There is a lot to see at this historical site, you can get the feel for how the rich performed funerals and burials and there is even an internal corridor you can explore and some engravings to see on the buildings.

There’s plenty to see and a lot of history sandwiched down every alleyway in the picturesque town of Lindos. Make sure you see it and let us know your personal highlights.